Super-fast internet delivered via beams of light instead of crowded wi-fi signals could revolutionise how Londoners get online, its inventor said today. Li-Fi uses ordinary LED lights to transmit data wirelessly around the home, but Professor Harald Haas said it would be possible to harness the power of the video billboards at Piccadilly Circus and turn them into a giant router. The speed of the new technology would vary between one and 100 megabits per second and Professor Haas said the highest speed would enable an HD movie to be downloaded in a few seconds€. The system works by fixing a microchip to a LED lightbulb, causing it to flicker millions of times a second. This creates a rapid stream of binary code, invisible to the human eye, which feeds into an web provider to bring users online via a dongle attached to their computer. Professor Haas said Li-Fi could provide internet speeds many times faster than currently received because of the multitude of light sources in London, including street lamps and even car headlights. He said it could revolutionise internet access for Tube passengers who would be able to get online even in tunnels, because of the light source in carriages. Li-Fi is also said to be more secure because light cannot travel through walls. 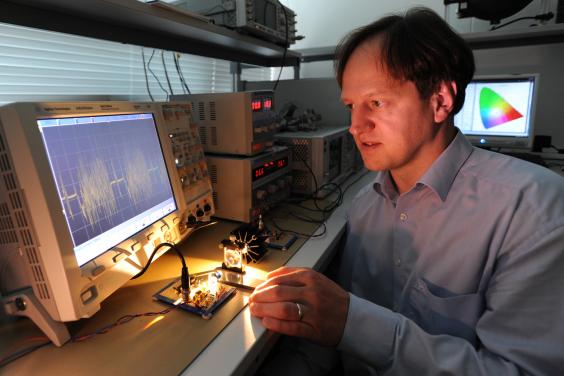 Light fantastic: Professor Haas's Li-Fi
Professor Haas said: In London, the problem is there are too many people in a too confined space and everyone wants a share of the bandwidth, which is very limited. We have lights on the Tube and in shopping malls and all these lights could provide 10,000 times more capacity than we have with wi-fi. It's a matter of using a big resource that is free for data communication. You could equip London's street lights with Li-Fi, you can have it on the Underground and the airport. Piccadilly Circus is made of LEDs and these LEDs are the devices you use for Li-Fi.€ In a TED talk, Professor Haas, chairman of mobile communications at the University of Edinburgh, demonstrated how HD video could be streamed via a desk lamp, but cut off when a hand is placed across the light stream. He said Li-Fi would play a key part in the powering the internet of things, connecting appliances to the internet, and could even cut energy bills. Source: London Evening Standard