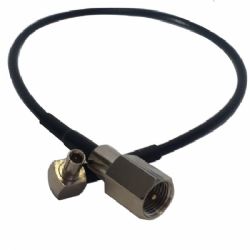 Co-Star has developed a new range of RF connectors and adapters  for connecting external antennas to Wireless Routers, Mobile Data Terminals (MDT's) and other wireless devices. FME Male to TS9 Male Right Angle Adaptor Cable The TS9 connector is often used across a number of cellular, GSM, 3G and 4G dongles, data cards and modems. Very similar in appearance to the CRC9 connector, the TS9 plug has a  gold plated centre pin and circular barrel with slots at the end. The C74-FP-025TS9RA cable has been designed to quickly & easily  covert an antenna terminated with an FME female which is a common connector used for mobile applications to TS9 without having to re-crimp. Co-Star have used a right angle TS9 connector to ensure secure connection into the wireless device. The cable length is 250mm of RG174 coax. SMA Male Reverse Polarity to SMA Female Adaptor

Widely used by Wi-Fi equipment manufacturers RP SMA connectors are designed to prevent consumers from accidently  connecting antennas with gain which would breach compliance. The female RP-SMA connector has the same external housing as a standard or conventional female SMA connector, which consists of an outer shell with the threads on the outside; however, the center receptacle is replaced by a male pin. Similarly, the RP-SMA male has threads on the inside like a conventional male, but has a center receptacle instead of the male pin in the middle. The CF.40 adaptor has a Reverse Polarity male and standard SMA female to enable engineers to convert a standard SMA male which is a commonly used as standard by antenna manufacturers to SMA Male Reverse Polarity. SMA Male Reverse Polarity to SMA Female Reverse Polarity Manufactured using low loss RG58 coaxial cable (250mm) the C23SRP.025SP/RP SMA Male RP to SMA Female RP cable extension can be used to convert the genders of RP SMA connectors on antennas or as a cable extension. Source: Co-Star